Research Spotlight on the Study of Creativity 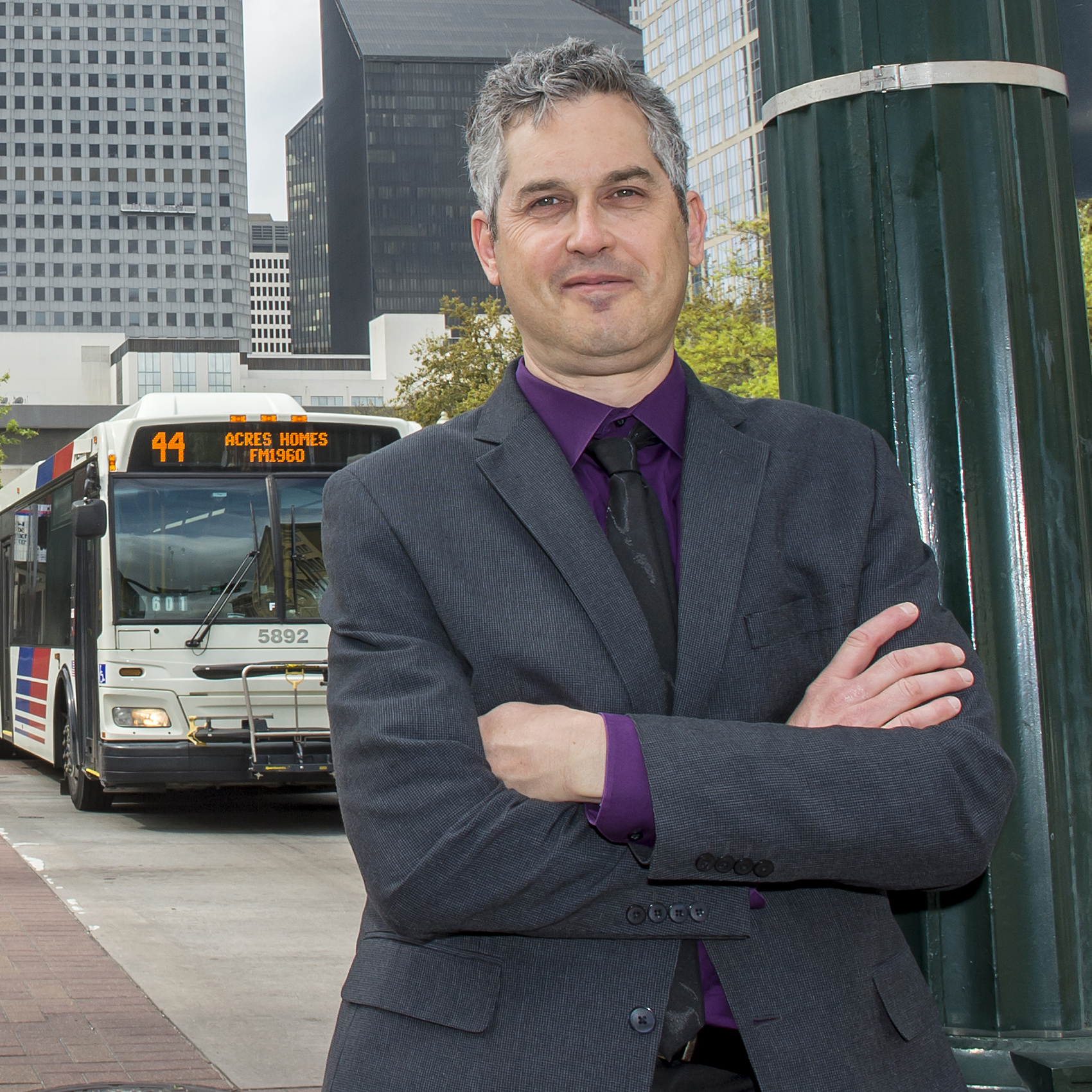 Anthony Brandt, Ph.D., is a Professor of Composition and Theory in the Shepherd School of Music. His honors include a Koussevitzky Commission from the Library of Congress and grants from the National Endowment for the Arts, Meet-the-Composer, the Houston Arts Alliance, the New England Foundation for the Arts, and the Margaret Fairbank Jory Copying Assistance Program.  He has been commissioned by Opera in the Heights, the River Oaks Chamber Orchestra, the Metamorphosen Chamber Orchestra, Da Camera of Houston, the SOLI ensemble, Houston Ballet II, the Bowdoin International Festival, the Moores School of Music Percussion Ensemble, the Webster Trio, the Fischer Duo, and others.

Your book, The Runaway Species, was co-authored by Stanford neuroscientist David Eagleman. How did your collaboration with Dr. Eagleman begin?

David (class of ’93) and I became friends when he kindly spoke at a benefit for Musiqa, the contemporary music ensemble that I direct, and later at a conference on Exploring the Mind through Music that I organized at the Shepherd School.  One day, we met for lunch near David’s lab and started talking about creativity.  David is renowned as both a neuroscientist and a writer of fiction, giving him a unique cross-disciplinary perspective.  Our conversation went on for several hours: the longer we talked, the more we realized how much our outlooks aligned.  David suggested that we write a book together; the Provost Office generously provided research support that made it possible.

What does creativity in art and science have in common?

Brains devote a considerable amount of effort and energy towards making predictions.  Most of the time, those predictions are projections of past experiences, built out of a model of the world that our brains construct.  Imagination can be thought of as predicting something that has never happened before, and creativity as making it come true by human hands.  The aims in the arts and sciences may be different but the creative processes are largely the same: rather than merely copying and pasting our prior experiences into the future, we refashion them, creating alternative realities, from scientific hypotheses to inventions and works of art.  Recently, a paper on agrochemicals cited our book, writing “Eagleman and Brandt provide a useful framework for human creativity which applies itself very well to chemical space exploration.”  It was gratifying to see our model applied to a field seemingly so distant from the arts.

How do cognitive strategies of bending, breaking, and blending play a role in the creation of new ideas?

In The Runaway Species, David and I develop a model to explain how the brain alters its inputs to produce novel thoughts.  Bending is a variation of an existing prototype—what could be termed “make a copy and alter it”; breaking involves fragmentation; and blending—a concept first introduced by Mark Turner and Gilles Fauconnier—involves merging multiple sources.  These cognitive tools work in concert, and operate in related ways in different disciplines.  For instance, modern mobile communication was invented when an engineer figured out how to break up a single phone broadcast area into smaller “cells,” enabling more people to make calls at the same time—a creative approach not that different from Pablo Picasso breaking up the visual plane in Cubism.  Although brain scans are not yet fine-grained enough to observe these tools directly, the first neurological evidence is starting to emerge: as a young male finch listens to his father’s song, his brain builds a neural pathway that enables him vocally imitate it.  As the song is mastered, the youngster’s brain makes a duplicate of that pathway, alters it, and from that produces a unique song the bird will sing for the rest of its life.  The young finch thus “bends” his father’s song to produce its own melody.

How do you incorporate other disciplines, such as science, humanities, and business, into music education?

Music consists of vibrating air whose patterns evaporate as each moment passes.  The only place a piece of music really exists is in the minds of its listeners: a musical performance is like a 3D printer inscribing itself into its audiences’ memories.  Studying what brains pay attention to, care about, and remember helps musicians better understand how that 3D printer works.  Thus, music cognition is a great asset to musical training.  Music, along with the other arts and the humanities, are among the most overt demonstrations of human creativity, and thus deeply inter-connected and central to an innovative culture.  And music is an entrepreneurial field, with musicians often responsible for creating their own opportunities.  A well-rounded musical education should incorporate all of these subjects.

As a world-renowned composer, artist, and professor, your breadth of work spans a range of interdisciplinary and collaborative projects. What have been some of your favorite projects with Rice students or the city of Houston?

With support from the Provost’s Office, Molly Gebrian, who was earning her DMA in viola, and neuroscientist Bob Slevc, then a Rice post-doc, and I published a paper in 2012 about music and early language acquisition in the journal Frontiers; the paper argued that infants first attend to the acoustic features of their native language, and only later bootstrap referential meaning onto this musical framework; we also showed that music and language acquisition co-develop at relatively equal rates throughout childhood.  The paper has been widely cited and led to invitations to write chapters for the Oxford Handbook of Music and the Brain and the upcoming Oxford Handbook of Music and Language.

Recently, I’ve written a string quartet in which each movement is based on a different feature of brain behavior.  Rice students are performing it, and NobleMotion Dance Company is creating a dance to the score that will be premiered in Houston in January and then performed at an international conference on the brain and dance at Wolf Trap in April.  Several of the dancers will be wearing portable EEG caps designed by University of Houston neuro-engineer Pepe Contreras-Vidal; data from the caps is being incorporated into the projections for the dance, making this a multi-faceted hybrid of the arts and science.

DMA composer Badie Khalegian and I are involved in an imaging experiment with Methodist Hospital’s Center for Performing Arts Medicine (CPAM) comparing how musicians and non-musicians’ brains respond to familiar and unfamiliar music.  One aim is to investigate the degree to which music cognition is biologically prescribed or shaped by exposure and training.  Finally, with the help of a grant from the University’s Creative Works Subvention Fund, I just recorded my chamber opera “Kassandra” with an instrumental ensemble of Rice students; Rice DMA baritone Christopher Besch sings one of the leads.

What is the Rice Arts, Cognition, and Health Science (ARCHES) Initiative, and what research areas are you currently studying?

Co-investigators Chris Fagundes and Brian Denny from Psychological Sciences and I are collaborating with CPAM on an NEA-funded experiment involving musical creativity and seniors with mild cognitive impairment.  Several groups of seniors are taking a six-week course in music composition. Their brains are being scanned before and after and compared with a control group to see if there are measurable differences in brain connectivity as a result of the course.  It’s one of the first experiments of its kind.  Rice DMA grad Karl Blench and I designed the course, which Karl is teaching.  Rice DMA grad and current post-doc Melia Bonomo is on the team analyzing the results.  We were able to complete the first round of workshops and scans before the pandemic put us on hold:  because the participants are non-musicians, Karl helped them invent personalized music notation, each of which was unique. The course culminated in a performance at the Moody Center: it was very moving to see the participants share their work with us and their families.  We’re eagerly looking forward to restarting the workshops later this spring.